Impact’s next major event is Slammiversary, so this Impact Plus event is the last stop along the way. I quite like the way Impact do these; rather than pretending that all PPVs are created equal, having the Impact Plus events be free to anyone with a subscription allows them to run premium events like this to encourage subscribers without vampirising the buys from their top-tier PPVs.

With WWE apparently giving up on the WWE Network – selling the US part to Peacock and keeping the overseas part of the service alive as a rump which is surely also potentially for sale in different markets as and when potential customers come along – in retrospect, one wonders whether WWE should have taken the same approach, having your Network subscription get you access to the archives and stuff like Backlash or Fastlane while charging extra for stuff like Wrestlemania or Royal Rumble. Sure, it wouldn’t be such a good deal for subscribers – but it might have been better for business.

Anyway, tonight all the championships except the X-Division title are on the line; Josh Alexander’s getting an opportunity to rest up after his iron man match against TJP from last week, but the X-Division remains relevant with a #1 contendership up for grabs. Let’s see how that pans out.

END_OF_DOCUMENT_TOKEN_TO_BE_REPLACED

Deathmatch wrestling isn’t exactly something I am proud of enjoying from time to time, particularly given some of the horror stories that have come out of the scene (especially in those parts of it which take the carny side of the wrestling business to extremes like paying people in pills). Still, GCW doesn’t make my soul feel dirty the same way that watching, say, an IWA Deep South event does; they seem to have wrestlers and crew who know what they are doing, rather than using the deathmatch schtick to cover for not being any good in the ring, and they seem to limit the more egregious types of deathmatch spot (like the interminable “sit still while your opponent very gently carves your forehead with a broken light tube” spot).

In case this is the first of these articles you read, a little note on methodology: I do these little reaction articles while I am watching the PPV live. I may miss stuff. Because of time zones, by the end I may be a bit sleepy – or have actually fallen asleep – which would tend to be a sign of a poor show.

END_OF_DOCUMENT_TOKEN_TO_BE_REPLACED

The 2021 Revolution might have ended with an infamously rubbish explosion, but other than that I thought it was another great AEW PPV, and I’m feeling myself actually more invested in the storylines coming into Double Or Nothing so I’m looking forward to this. AEW now have substantial numbers of fans in attendance for this one, and are planning to return to touring in July, so this event looks like it’ll be one of their last major landmarks of the pandemic era – let’s see how it pans out.

In case this is the first of these articles you read, a little note on methodology: I do these little reaction articles while I am watching the PPV live. I may miss stuff. Because of time zones, by the end I may be a bit sleepy – or have actually fallen asleep – which would tend to be a sign of a poor show.

END_OF_DOCUMENT_TOKEN_TO_BE_REPLACED

It’s not often that I put something on my tabletop RPG-related blog which has a significant wrestling connection (especially if you don’t count Brandon Cutler’s Dungeons & Dragons fan gimmick), but today I have: it’s a review of World Wide Wrestling, a tabletop RPG of professional wrestling drama both in the ring and off-camera. It’s a fairly neat, sympathetic treatment of the subject from the perspective of an entirely different niche entertainment medium; if you like the idea, check out my review.

WWE has managed to comprehensively destroy any enthusiasm I had for any of the angles going into WrestleMania, so I’m not watching it this year. It’s always a bit of an effort to watch live because I’m in the UK and the time zone difference is unkind even for a conventional PPV (let alone one which yawns on for as long as recent WrestleMania offerings), but Creative’s efforts have turned me solidly off, along with almost all the people I’d usually be chatting with online as we watch.

However, Impact to the rescue! Their WrestleMania weekend offering is Hardcore Justice. This year, the schtick is that Tommy Dreamer has been put in charge of the event and booked all the matches. (His official title is Executive in Charge of Wrestling, Whether this is purely kayfabe, or whether Tommy actually booked the show (which would kind of make this an Impact/House of Hardcore crossover event), I’m not sure, but that’s clearly the ECW-nostalgia-modern-sensibilites vibe that Impact are going for.

END_OF_DOCUMENT_TOKEN_TO_BE_REPLACED

The numbers don’t lie and they spell disaster for Samoa Joe at Sacrifice 2021 – the numbers in question this time being the time remaining on his WWE contract. But hey, though Joe is no longer a pillar of Impact/TNA, the Sacrifice show still is. 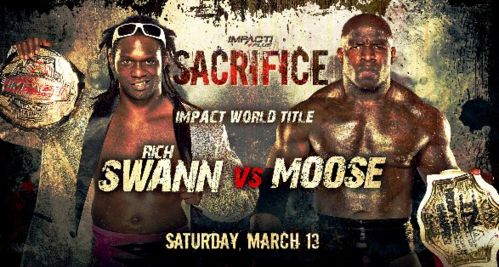 You see, normally you only get one post a month or so on this blog, but March is a genetic freak and it’s not normal, so hot on the heels of my AEW Revolution article I’m going to cover tonight’s Impact show.

A little note on methodology: I do these little reaction articles while I am watching the PPV live. I may miss stuff. Because of time zones, by the end I may be a bit sleepy – or have actually fallen asleep – which would tend to be a sign of a poor show.

END_OF_DOCUMENT_TOKEN_TO_BE_REPLACED

AEW keeping their PPV events sparse (compared to the overstuffed WWE calendar) seems be working out for them, because it means each of them has the sense of a special occasion to them. That’s particularly so for Revolution, which was one of the last PPVs to happen before lockdown last year. 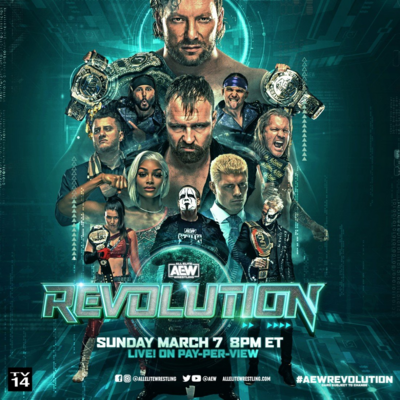 Between that, and between it being a damn good show by any measure, Revolution 2020 gives Revolution 2021 a lot to live up to. Let’s see if it managed, shall we?

A little note on methodology: I do these little reaction articles while I am watching the PPV live. I may miss stuff. Because of time zones, by the end I may be a bit sleepy – or have actually fallen asleep – which would tend to be a sign of a poor show.

END_OF_DOCUMENT_TOKEN_TO_BE_REPLACED

WWE does a lot wrong these days, but one long-standing tradition there which to my mind really, really works well is having the Royal Rumble be a big tentpole event at the start of the year to kick off the build to Wrestlemania. The Rumble match format has not been devalued in the same way, as, say Hell In a Cell was by the awful finish to the 2019 Bray Wyatt vs. Seth Rollins match, there’s a sense of occasion to it, and even if bad calls on the winner have been made from time to time it’s rare that the Rumble Matches have been without fun moments. 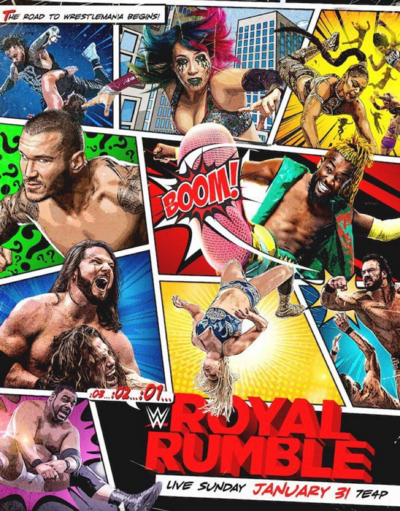 This year is the first and hopefully last time the PPV has run under pandemic conditions; here’s how I feel it went.

END_OF_DOCUMENT_TOKEN_TO_BE_REPLACED

Here we go with another attempt by me to post a bit more regularly here. I’ve decided to change up how I do these – specifically, I’m going to stop doing predictions, because if I just concentrate on results that’s 50% less work for me and I can concentrate on whether I enjoy the event, rather than whether my expectations were met. 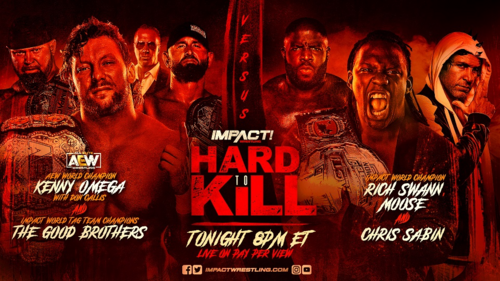 This is the first PPV that Impact have done with a new commentary team of D’Lo Brown and Matt Striker. I quite liked Madison Rayne as a heel commentator, but Josh Matthews didn’t do an awful lot for me. Madison announced she was retiring from Impact Wrestling at the end of the preshow, so in light of her departure the time may well have been right to shift Matthews to more of a backstage role and bring new names into the commentary team. By and large I thought the commentary was good this time, but it’s clear that the two will need to work a bit more before they really ease into a comfortable chemistry with each other. (It’ll help if the technical team can avoid issues like the one which took out D’Lo’s microphone.)

They also debuted canned audience noise, tweaked appropriately to the action in the ring. This is corny, but I guess they decided that with no audience (not even an audience of wrestlers and technicians) involved they seemed a little rinky-dink next to AEW and WWE, and if WWE can effectively do a very expensive version of canned crowd noise with their manipulated Thunderdome sound effects, why can’t Impact just do canned crowd noise without the expense and distraction of the Thunderdome? It works better than you’d think, in my opinion – it reduces the silence and dead air of wrestling in an empty room, which has a bigger effect than you’d think.

END_OF_DOCUMENT_TOKEN_TO_BE_REPLACED

As promised, I watched the fourth UWN/NWA weekly PPV. It’s the last one in the bundle and I’m probably not going to continue with it. 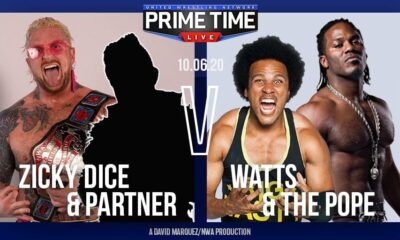