Time for the second AEW event ever! Fyter Fest seems to be pitched as a less significant show than Double Or Nothing – which isn’t to say that there’s no stakes, but it’s being offered for free in the US and generally seems to be intended to provide build to All Out rather than being a destination in its own right. 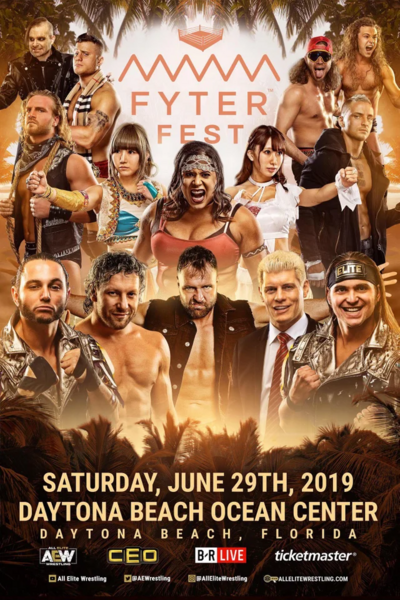 It makes sense for AEW to offer free/reasonably-priced “B”-shows like this as a means of advancing its storytelling until its television deal starts and to provide an onramp for new viewers, and with WWE in the doldrums right now it feels like all AEW needs to do tonight to stay on course is to provide a decently entertaining show. Let’s see what’s in store…

Including a women’s match on the preshow as well as the main card is a useful step forward here. Leva Bates has an ongoing issue with Avalon over who is actually “The Librarian” in AEW, so we’ll see whether any intergender shenanigans kick off; my hunch, though, is that this is largely about giving Kylie Rae a win back after she lost her Double Or Nothing match, since they’re clearly looking to make her a star.

This is likely to be a comedy thing; Nakazawa is the guy who did the baby oil gimmick in the Double or Nothing preshow battle royale, Alex Jebailey is the guy who arranges the esports event that Fyter Fest is providing entertainment at. I suspect it’ll turn out to be some sort of esports bout rather than a wrestling match as a result.

Worth noting that Christopher Daniels will not be wrestling in this one (though don’t rule him out meddling on behalf of SoCal), because he’s got a main card match.

The stake here is that the winners get to have a match at All Out, the winners of which will get a first-round bye in the AEW Tag Team Tournament. Seems like a slightly slim reward to me, but perhaps we’ll see the match disrupted by those heinous invaders who totally aren’t called the Super Smash Brothers these days for copyright reasons which will render that prize moot anyway.

This is a chance for CIMA to get a win back on behalf of Strong Hearts; if he does, I expect that’ll set up an ongoing SoCal vs. Strong Hearts feud.

Two joshis and the second hugest woman on the AEW roster (next to Awesome Kong) means this should be a treat. If it were a two-way match between Nyla and either of the other two, it’d be a David-and-Goliath challenge, but in this format I reckon we’ll see this as a showcase for Nyla’s strength as she overcomes the numbers game.

MJF as the chickenshit heel that the three other participants here want to tear apart is a good use of his heeling skills. Given the sort of chaotic clusterfuck such matches can turn into, don’t rule out MJF winning through sneakiness.

The Elite (the, the Elite) (Young Bucks and Kenny Omega) vs. Lucha Bros. and the Laredo Kid

The Bucks of Youth won at Double Or Nothing, but the Lucha Bros. got AAA’s gold back for Mexico a couple of weeks or so ago. This should be an absolute feast of technical wrestling given the talents involved regardless of the result.

I don’t know who this Debry Allin guy is, but changing your last name to the name of a successful Cody-helmed PPV event shows dedication to the company, maybe Cody will give him the win out of respect for that or something. Feels like they haven’t done a good job of getting the story of this match out there for folks who don’t follow Being the Elite or similar.

This is likely to be a bloodbath, given the past and the rhetoric from both sides – at least, if it isn’t, it’ll feel toothless, especially given that Dustin Rhodes was publicly exsanguinated in the ring and then resurrected with a hug at Double Or Nothing. I give the edge to Moxley solely because blunting his push at this point would be a shame, but I think Janela will take him to the limit. With Moxley busy being IWGP US Champion, beating Young Lions and adopting them like pets, and entering the G1 classic, it feels like he’s burned through half of his post-WWE career checklist already, but in fact he’s just getting started. As bloody and senseless as the coming violence may be, at least it will be a better spectacle than one of Moxley’s old Shield comrades getting pissy on Twitter.