As mentioned, rather than doing full TV Party Tonight! treatments for the WrestleMania indie shows, I’m going to instead do little articles like this on those I happen to catch, within which I won’t do full match-by-match breakdowns so much as I just spill my general thoughts.

Game Changer Wrestling are putting on an absurd number of shows this weekend – they’re clearly bidding to set themselves up as a top-tier indie promotion. The secret seems to be offering something distinctly different in each show. That’s particularly evident with the Bloodsport shows – this year it’s Josh Barnett’s Bloodspoot, in previous years it was Matt Riddle’s Bloodsport but, well, you can blame William Regal for that changing. (Incidentally, Dean Ambrose and William Regal were spotted sitting together at this year’s Bloodsport, so I guess Ambrose is doing WWE the favour of helping out with some talent scouting, seeing how he doesn’t have a Wrestlemania match to prepare for.) 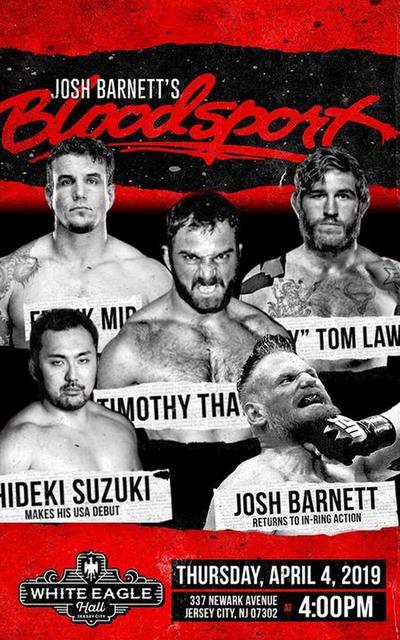 The particular Bloodsport schtick is that it’s a sort of blended MMA-wrestling event: the matches, I believe, are worked, but the performers are chosen either for MMA chops or at least some sort of “shoot badass” reputation (real or kayfabe) and rather than working conventional wrestling matches it’s this sort of hybrid sport. There’s no ropes on the ring, and there’s no pinfalls – just referee stoppage – but it’s not a no-DQ situation, with various proper rules being enforced. The end result involves a lot of MMA-ish matwork along with pro wrestling storytelling given a particular twist due to the particular rules that the heels have to evade.

This angle was reinforced by the result of the opening match – in which, due to heel Phil Baroni putting his hands on the ref, the referee reversed the final call and gave the win to his opponent. It wasn’t a decision which particularly displeased the crowd, given that Baroni had established himself as an asshole, and it was an effective way to send the message that this wasn’t the sort of deathwatch nuttiness or cartoonish nonsense that some of the other GCW shows this weekend will partake in – this is presenting itself as serious business, and having the first bout end like this was an effective way to do that.