OK, here’s my reaction (as jotted down between matches whilst watching live). 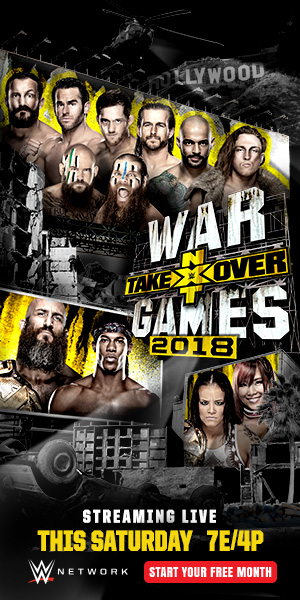 If you want to compare and contrast with my expectations to see just how off-base I was, they’re here.

This was a surprise match, but with only four on the official card there was ample space for one, and it makes sense that they’d want to give a hot talent like Riddle a bit of a spotlight. This made me convinced we’re going to see some callups after this, since this seemed to be meant to fast-track Riddle to being a big name in NXT, probably to replace a departing babyface.

Sane had her insurance prepared, though it only came out for the last fall in the form of Dakota Kai and Io Shirai (though at points in the match Sane proved capable of taking on all three Horsewomen herself). I’m excited to see if this leads to a faction war building to a women’s WarGames match for WarGames 2019.

Also, it’s appropriate that the Warhammer 40,000 fan won at an event titled WarGames.

A proper war this one. Black winning suggests that, after all, the two of them might not ever be E…QUAL, and also makes me think that, if Ciampa retains, they might build towards the same three-way that got derailed by Black’s groin injury.

Perhaps the most surprising thing about this match was that it included a referee actually spotting that someone was grabbing the tights for once. Dream’s second Hulk Hogan-spoofing entrance leaves me thinking that WWE should just save themselves a bunch of money, not bother bringing Hogan back for giving pointless speeches which accomplish nothing and advance no storyline, and just use Dream instead.

So the finish nicely advanced the ongoing story between Dunne and Ricochet, but overall I think this match did a lot for everyone involved simply for their ability to make such a long, epic match engaging all the way through. Everyone got to work their particular strengths, the “lock Dunne in the cage to keep advantage” for longer angle actually seemed like a sensible strategy, and it looks like nobody got horribly injured in the process. You can’t ask for more than that, really.