Is there a better way to debut a pro wrestling blog than going to a live show? If there is, I can’t think of one. 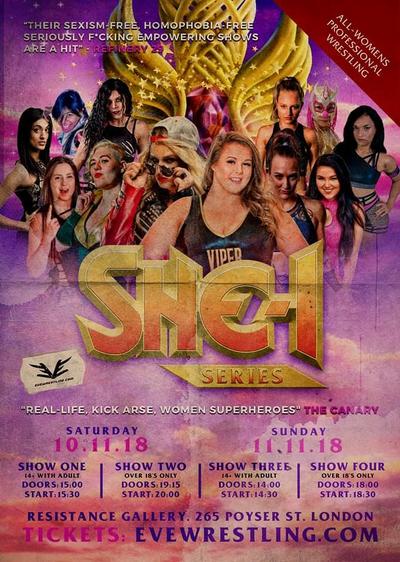 Pro Wrestling:EVE is a local-ish promotion to me (the Resistance Gallery, where they have most of their shows, is about an hour’s tube ride away), and I’d attended  a panel featuring some of the people involved at Nine Worlds 2018. If WWE and Stephanie McMahon like to claim a lot of the credit for giving women’s wrestling the legitimacy it has today, it’s promotions like EVE who are actually working at the coalface doing the hard work. Sure, WWE putting on shows like Evolution a) isn’t nothing and b) simply wouldn’t have been viable without WWE putting a lot of groundwork in to develop their women’s division over a number of years and create new, credible stars.

But it’s EVE and other such promotions which are giving WWE the raw material they need to work with to get to that point, both in terms of performers who’ve honed their talents on the indies and in terms of persuading a wider audience that a women’s match isn’t there to provide you with glib titillation or time for a piss break.

The She-1 Series is, as the title implies, a riff on New Japan Pro Wrestling’s G1 Series; just as the G1 gets a title match at Wrestle Kingdom, the She-1 winner will get to headline Wrestle Queendom. Of course, the She-1 needs to wrap up in the space of a weekend, so it’s a bit more modest in scale than the G1. The format is this: you have three blocks of four wrestlers, everyone gets a match against everyone else in their block. You get 2 points for a win, 1 for a draw, if the final result of a block is tied then tiebreaker matches determine a winner. The winner of each block goes into a triple threat final match, winner of that’s going to Wrestle Queendom.

They’ve got a slot set of talent promised for over the weekend, including some major names in UK women’s wrestling. To fill out show 4, there’s going to be a championship match between current EVE champion Charlie Morgan and Kay Lee Ray, who’s always beaten her whenever they’ve faced off in the past. Kay Lee Ray, it should be noted, is the current World of Sport women’s champion, and fellow World of Sport talent Viper is competing in Block A. At the same time, Block C includes not one but two women who’ve been heavily hyped in NXT UK – Jinny (who’s apparently getting her full TV debut next week after some weeks of hype videos) and Toni Storm, who just won the Mae Young Classic which is about as unambiguous a “We’re giving her a huge push” signal as WWE can possibly give at the moment.

Rather than obnoxiously liveblogging in the middle of the show, I’ll write up my thoughts after each show and post them here. If you don’t want spoilers – say, because you want to watch the show for yourself on EVE’s video on demand service – I’ll put the result specifics beneath the “read more” cut on each article.